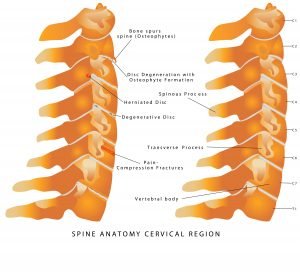 MANY AMERICANS ARE FAMILIAR with surgery for replacing arthritic joints that have become painful. In the US, approximately one million worn-out knees and hips are replaced by artificial joints every year. Overall, results for these procedures are excellent, allowing patients to return to active lifestyles.

Joints in the spine, called intervertebral discs, can also become painful, similar to knees and hips when they become arthritic. This is a common condition, affecting up to 80% of adults as they get older. For a small subset of these patients, the pain may become so severe that surgery is required.

It is only recently, however, that artificial joint replacement technology has been perfected for these cervical discs in the spine. Previously, the only treatment for rebuilding a damaged disc was to remove the entire cervical disc and replace it with a fixed, immovable cage (spinal fusion surgery). When performed in the cervical spine (neck), this operation was called Anterior Cervical Discectomy and Fusion (ACDF).

ACDF, though very effective at relieving pain and dysfunction caused by a damaged intervertebral disc, has a drawback: fusion leads to decreased neck range of motion. More importantly, fusing a joint in the neck can lead to accelerated wear and tear on the joints nearby. This process, known as adjacent segment disease, can create additional problems for the patient many years after a successful spinal fusion procedure.

Cervical artificial disc replacement surgery solves this problem by preserving motion in the treated joint. As a result, spine patients can now experience the same motion-preserving benefits that hip and knee patients have enjoyed for decades.

Why Is Cervical Disc Replacement Needed?

Patients who are experiencing arm, shoulder, and neck pain (cervical radiculopathy, pinched nerve, or cervical stenosis), and who have not improved with conservative care, can be considered for surgical intervention. Historically, anterior cervical discectomy and fusion was the surgical treatment of choice for these patients. Cervical artificial disc replacement is now an excellent alternative to ACDF.

Do All Surgical Candidates Qualify For Cervical Disc Replacement?

Currently, the FDA approves disc replacement for the treatment of only one or two intervertebral discs. Patients who need more levels treated may need ACDF. In addition, disc replacement requires certain ligaments in the spine to be intact, along with normal bone alignment. By closely studying an MRI or CAT scan, a doctor can decide whether a patient qualifies for cervical disc replacement.

How Is Cervical Disc Replacement Performed?

Surgery for disc replacement is very similar to ACDF and takes between 60 and 90 minutes to perform by an experienced CNSO surgeon. Surgery can be performed in a hospital or ambulatory surgery center.

After general anesthesia is given, an incision is made on the front of the neck. The windpipe (trachea) and food pipe (esophagus) are then carefully moved to the side and protected, allowing direct visualization of the spinal column (typically an inch or two under the skin). The damaged disc is then removed, and all loose disc fragments are taken off the spinal cord and nerves. An artificial disc, made from metal and medical-grade plastic, is then custom fitted into this space.

How Long Does It Take To Recover From Cervical Disc Replacement?

Cervical disc replacement is typically an outpatient procedure. Patients are usually discharged home the same day or the next day after the procedure. A cervical collar for immobilization may be required for one or two weeks depending on the neurosurgeon’s preference. Postoperative discomfort from the procedure is tolerable and usually limited to two to three days and can be controlled with oral pain medications. Preoperative symptoms such as pain, numbness, tingling, and weakness are often markedly improved within hours of the procedure. However, full recovery may take up to weeks or even months.

Postoperative office follow-ups are usually done at 2 weeks, 6 weeks, 3 months, 6 months, and 1 year. X-rays are routinely performed to check for proper positioning and functioning of the artificial disc replacement. Most patients are back to work on light duty in one to two weeks and full duty in about 6 weeks after disc surgery.

How Does Cervical Disc Replacement Compare to ACDF?

What Are The Advantages of Disc Replacement Surgery Over ACDF)?

Reduced postoperative pain and recovery. With a cervical disc replacement, the need for any cervical immobilization lessens to a week or less as compared to 6 weeks with an anterior cervical discectomy and fusion.

No need for an anterior plate placement. Consequently, there is less irritation to the esophagus, and less swelling, both of which may cause difficulty swallowing and hoarseness.

Factors To Consider When Choosing A Spine Doctor

Considering all these factors, it can be very difficult to accurately identify the pain generator in any particular patient. If the original diagnosis is inaccurate, then even well-executed spine surgery can leave the patient in pain, because the true source of pain was never accurately identified. Worse, there may be unnecessary complications from surgery, and scar tissue formation, that creates even more pain.

How CNSO Can Alleviate Disc Pain

The only way to overcome the difficult problem of accurate diagnosis in spine care is this – the doctor must spend enough time listening to the patient and asking a lot of questions. With enough time, important clues in the patient’s story can help a doctor identify the underlying problem. The doctor must also perform a thorough and detailed examination searching for all of the signs that lead to a proper diagnosis. All of the findings then will be correlated with imaging study results and the correct pain generator will be identified.