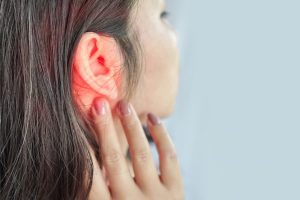 lossopharyngeal neuralgia is a condition that causes severe pain in the ear, nose, and throat areas. The Centers for Neurosurgery, Spine, and Orthopedics is equipped with the expertise to help patients alleviate glossopharyngeal neuralgia, among many other conditions. The award-winning team is comprised of elite board-certified neurosurgeons who specialize in every type of brain surgery, and collaborate with physicians specialized in non-surgical pain management, physical medicine, and rehabilitation physicians to ensure each patient receives the highest quality of care.

Glossopharyngeal neuralgia is a painful condition that causes sharp, stabbing, “shock-like” pain in the ears, nose, and throat areas. These areas are affected together because the ninth cranial nerve, known as the glossopharyngeal nerve, provides sensory input to these structures. Multiple attacks can occur within minutes of each other. The symptoms most commonly occur during the day but can disrupt sleep as well. Painful glossopharyngeal neuralgia symptoms are rare and can be misattributed to the wrong cause by providers unfamiliar with the disease.

Preventing the symptoms and alleviating pain are the primary goals of glossopharyngeal neuralgia treatment. Anti-seizure and/or antidepressant medications are particularly effective for preventing and reducing glossopharyngeal neuralgia symptoms. However, if medication therapy is not effective and there is a structural abnormality or a tumor causing the pain, surgical treatment may be indicated.

In most cases of glossopharyngeal neuralgia, pain occurs along one side of the face. In rare cases, both sides of the face may be affected. The specific areas of the face that may experience pain or numbness secondary to the compression of the ninth cranial nerve include:

Glossopharyngeal neuralgia causes severe pain, which is described as “sharp,” “shooting,” “stabbing,” or even feeling like an “electric shock.” The duration of the episodes may vary, lasting anywhere from a few seconds to a few minutes. These pain attacks can occur continuously or may stop for days at a time before returning. Most patients don’t report feeling any pain between attacks, though some experience residual pain that lingers for a while after the initial “shock” feeling.

Symptoms of glossopharyngeal neuralgia may also be experienced if something touches the tonsils.

Diagnosing the cause of facial pain typically begins with the patient reaching out to a doctor. Depending on who they first contact will determine the course until the patient is properly diagnosed. Neurosurgeons and neurologists are experts at determining which nerve is causing the patient’s discomfort. Both begin with listening to what the patient is experiencing and then performing a neurological examination. If patients keep a log of the surrounding events when symptoms occur, it can be helpful for the physician to diagnose the condition and advise what provokes the symptoms and what to avoid.

Depending on the patient’s symptoms, the doctor may order further diagnostic tests to identify the root cause of the pain. The tests they order and the reasons why are:

If a tumor is not the cause of facial pain, reducing and eliminating pain is the overarching goal of glossopharyngeal neuralgia treatment. Often, antiseizure or antidepressant medications are the most effective for targeting the symptoms of this condition. Such medications may include gabapentin, duloxetine, valproic acid, clonazepam, or topiramate. The neurosurgeon or pain management physician will first prescribe a low dose at first and will adjust for greater pain control as needed.

Other remedies that can work in tandem with medication is:

If symptoms persist after attempting drug therapy, surgery may be needed to decompress the nerve which will alleviate the pressure. The soreness from the procedure will decrease within the first two weeks of the surgery and a full recovery can be expected within four to six weeks.

Glossopharyngeal neuralgia is just one type of the many conditions the team at the Centers for Neurosurgery, Spine, and Orthopedics is equipped to treat. The neurosurgeon-led multi-specialty teams across Bergen, Morris, Passaic, Hudson, and Essex counties in New Jersey provide patients with compassionate, comprehensive care. Make an appointment with the CNSO doctors today.